The following was written by Ruth (Ford) Bradford.[1]

A Chronicle of Duxbury 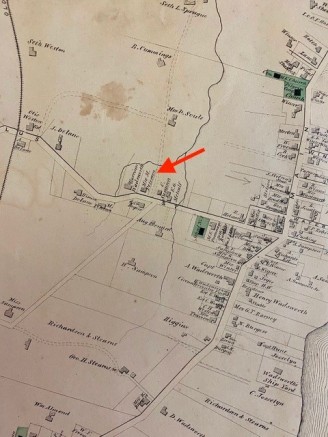 1879 Atlas showing the location of Matilda Peterson’s shop on Surplus Street, near the junction of South Station Avenue. 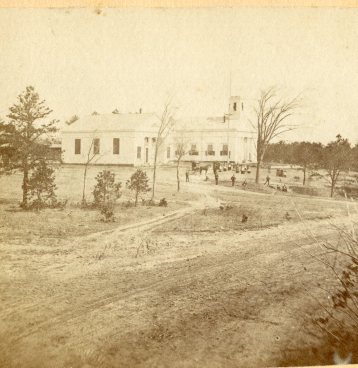 Town Hall and Partridge Academy, c. 1870. As they would have appeared when Ruth Bradford attended.

Academy and I remember her as one of my school mates, though she was younger than I was, her friends were invited home and made welcome; before many years Sophia’s mother was invited to live there also, this required no small amount of unselfishness, for one arm was paralyzed and useless, but she learned to sew with her left hand, by the use of a pillow and in many ways helped herself, and assisted others. Sophia grew to womanhood and married James Bradford – her aunt liked her choice, and was reconciled to losing her, the great interest Mrs. Matilda took in Sophia’s married life was evident to her friends, on the birth of her first child Sophia died, this was a very severe blow, as she lived a distance away and she could not be with her. True to her nature she met this shock with much of her natural calmness, and in a short time she took the infant home and gave to that the love she had its mother, so as the years went by the stately severity of her silent sorrow was, through her human interests, and love again unlocked the put up barriers to her heart. It was beautiful to her friends to see this change from former days. A piano was bought for the little girl, and gradually the shop was given up, the stock ceasing to be replenished. About this time the Old Colony Rail Road carried its South Shore branch through the town, which superceeded the Stage Coach so people could go to Boston to buy their dresses, and match their ribbons and worsted. The crippled grandmother still had her place in the house and a cousin Rhoda Simmons, who had served a long and faithful life at service in many houses was invited to come and spend the rest of her days here. It was indeed a haven of rest to her who had worn herself out in patient and unselfish toil; sometimes it proved too quiet in its changes from former days, but after various attempts to service again, she quietly settled to the life here, until the end came. Sophia’s husband married again, the little girl grew up and married also. Now the old grandmother is dead and Mrs. Matilda has also passed beyond our ken to be reunited with those she loved and lost – her life proved a blessing and benefit to others, and is a lesson for the worth of keeping up human empathy under all the trials of life.

[1] Ruth A. (Ford) Bradford was born in Duxbury on Sept. 30, 1832 to James Turner Ford and Anna Dingley Waterman. Her father was one of the owners of the Ford Store on Tremont Street in Duxbury, considered to be the oldest department stores in America. She attended primary school at the Millbook School and graduated from Partridge Academy, a private co-educational secondary school established in 1844. In 1857 she married Duxbury native, Rev. George Bradford (1828-1859). Bradford had attended Harvard and, in 1852, was a teacher at Partridge Academy. He later entered Harvard Divinity School. At the time of their marriage, George was the Unitarian minister in Watertown, MA. He died in 1859 of consumption. Ruth did not re-marry and remained in Watertown until her death in 1912, at the age of 79. While writing this memoir, Ruth was visiting California.

[2] Matilda W. (Chandler) Peterson (1798-1884) was born in Duxbury, the daughter of Thomas and Matilda (Wadsworth) Peterson. In 1822, at the age of 23, she married James Peterson. James died three years later, in 1825, leaving Matilda a young widow with no children. She opened a store in the front rooms of her cape-style house on Surplus Street. This shop sold dress goods and “fancy articles,” as well as wool for embroidery. A visit to her store was considered a great treat to the young women in town, including Ruth Ford Bradford and Pauline Winsor Wilkinson (both women fondly recalled Peterson’s shop in their memoirs).