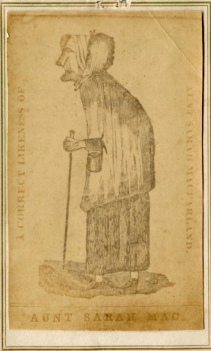 You did not want to get on the wrong side of Sarah McFarland (or McFarlin). She had a biting wit which she often delivered, on the spot, in rhyme. Despite her occasional caustic outbursts, however, she was a respected and much loved member of the community.  The memory of both her poems and good deeds far outlived her – making her a Duxbury icon for generations.

Aunt Sarah Mac, as she was widely known, was born in 1739 to William McFarland and Sarah Peterson. She received a public school education, such that is was for girls of the time, and proceeded to become a teacher herself. She remained unmarried and occupied a small house in the Millbrook area of town (near the corner Tremont and Alden Streets). As an older woman she was recognizable to all by her red cloak and black bonnet. To supplement her meagre income, she sold eggs, berries and milk from her cow, Blossom. She also often helped neighbors with the housekeeping and child care. In 1829 poverty forced her into the Alms House where she later died in 1831, at the age of 91.

She must have been exceptionally adept at the English language because she boasted that she could “answer every question put to her in rhyme.”[1] Anecdotes of her life and her poetry were resurrected in 1851 in Sarah Macs Budget, a newspaper issued as a vehicle to raise money for a monument to Rev. John Allyn, the town’s former minister. Its six pages, edited by Mrs. Ann Porter, the wife of Duxbury’s town doctor, John Porter, contained Sarah’s writing as well as reminiscences from those who still recalled her.  The Drew Archival Library has copies of the paper as well as Sarah’s original compositions in her own hand. 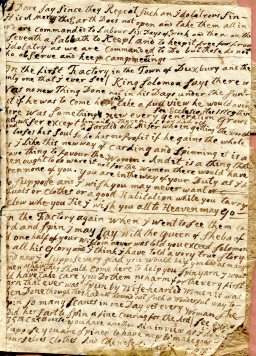 The following are a few examples of her poems:

When she was caught picking cranberries on private property she responded:

I am on old woman, seventy-one,
Cranberry law has just begun –
Men make laws but I don’t mind ’em
I pick cranberries where I find ’em

When asked to live with a married man who had separated from his wife, she retorted:

To tell you the truth, I’m not like Ruth
Who’s gone to live with Sam Darling
If you expect to have me, disappointed you’ll be,
As long as I’m Sarah Macfarlin.
For be it known, I’d rather live alone
All the days of my life,
Than to have a man, if I know that I can
Who has got another wife
You’ve had a virtuous bride and you’ve set
her aside
And I think you’re a simple man –
But since it is so, it is best you should know,
You may get another if you can.

Her poetry also recognized deeper social issues, such as progress and the role of women. After visiting the new woolen factory in Duxbury she composed the following:

On the First Factory in the Town of Duxbury
And the only one I shall ever see
King Solomon says there was no new thing done,
Not in his day under the sun;
But if he was to come here, and take a full view.
Then he would avert there was something new.
Every generation grows wiser and wiser,
Except here and there a sordid old miser;
Sirs! I like this new way of carding and spinning;
It is a brave thing to favor the women –
And it is a thing that men ought to do;
Had it not been for the women, there would have been none of you.
And the Factory again, when I went to see them spin,
I may say with the Queen of Sheba of old,
That the half of your wisdom never was told;
You exceed Solomon in all his glory,
And I think I have told you a very true story;
And now, I suppose, very glad you would be,
If you had as many women as he :
But if they should come here to help you spin yarn,
I hope you’ll take care that you do them no harm;
For the very first yarn that ever was spun,
By weak hearted women it was then done;
Though they had not found out such a wonderful way,
To spin so may skeins in a day –
Yet, every woman she did her part,
To spin a covering for the Ark
You have another aim in view, as I do suppose.
You are spinning to have new to make yourselves clothes.
You do very well, sirs, they say to the least,
So, I wish you all prosperity and peace;
And it is my sincere desire,
That your factory may not take fire,
As some have done of late,
Which is a loss to the whole State –

Her will demonstrates she could be as kind as she was cantankerous. A portion reads as follows:

August the 24th AD 1824 BE IT KNOWN unto all Men whom it may concern that whereas I Sarah Mackfarland now of Duxbury having arrived at the age of eighty four the third day of last June and expect to die very soon have thought fit to leave these lines was my last will that ever may be found after my Body is laid under the ground and it is my will that my funeral may attended at the Meetinghouse and that I be buried as near the grave of my dear mother as may be room found. Now I shall dispose of my property…by virtue of this will give my under bed a straw bed with all the bed clothes and my wearing clothes to those Single Women in Duxbury Almshouse every woman that has no husband shall have an equal share and after my lawful debts and funeral charges are paid out of the purchase of my Household Stuff if there is anything left to the overplus if there be any I freely give to the Reverend Doctor John Allen my minister. 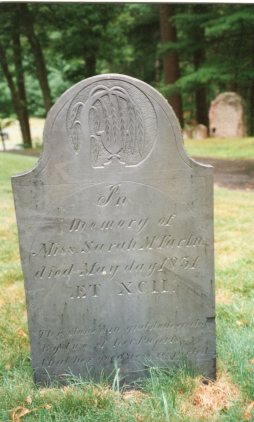 There were no funds at the time of her death to place a marker at her grave in Duxbury’s Mayflower Cemetery. Years later, some of her former pupils, including Capt. Gershom Bradford of our Bradford House Museum, erected a stone in her honor.