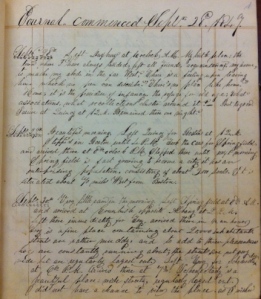 Left Duxbury at 10 o’clock AM.  My birthplace; the town where I have always resided, left all friends, acquaintances, my home, to make my abode in the far West.  There is a feeling upon leaving home which no pen can describe, “there is no place like home.”

Thus begins the journal of 15 year-old Duxbury native Amherst A. Alden (1832-1909) as he embarked on his journey to Illinois.  At the time Amherst left Duxbury there was little to keep an educated young man at home. The decline of the town’s great shipbuilding era left scant employment other than the ill-paid and laborious work of shoemaking. Luckily the United States was full of places a man of ambition could make his mark.  Many moved to Boston (see previous blog post about Eugene Sampson), some went to sea and others followed the country’s manifest destiny and went west.

Prior to leaving Duxbury in the fall of 1847, Amherst was presented a journal by his neighbor, Ann Thomas Porter, the wife of the local doctor, John Porter. His travels to the “far west” took him through western New England, down the Erie Canal, and eventually to Pekin, Illinois where he became employed as a teacher.  He diligently recorded his day’s activities every evening until the book was complete on April 19, 1848.  It is a wonderful look into daily life in Illinois during this period – names, places and events are recorded that would be of interest to anyone whose ancestors founded the towns of Pekin or Tremont.  Also fascinating are his use of exclamations such as “Oh Scissors” and “My Conscience.”

After only a year in Illinois Amherst made his way back to Massachusetts.  He became the private secretary to Daniel Webster and then a clerk in the Boston Post Office.  In 1853 he married Georgina Cook, the daughter of a shipwright. They had one child, Jennie. The family split their time between Duxbury (366 Washington Street) and Boston.  Amherst A. Alden died in 1909 and is buried in Mayflower Cemetery in Duxbury.

The journal is currently being transcribed by a Duxbury High School intern, Gaby Davis.