While everyone is familiar with the fabled courtship of John Alden and Priscilla Mullins, there is an equally enchanting (and truer) love story that took place in Duxbury. This is really a tale in two parts, so while I promise you there will be a romance before the end of this blog, I am obligated to set the stage with a bit of history.

In 1823 Rebecca Frazar, a descendent of the above mentioned John and Priscilla, inherited $9,000 from her friend and employer, George Partridge. Rebecca had acted as housekeeper, hostess and occasional business agent for Partridge and, as such, shared his home for thirty years.[1] George Partridge was one of the leading figures in Duxbury and had a strong belief in education. In addition to his bequest to Rebecca, he left $10,000 to the town for the establishment of a school (Partridge Academy was built with these funds in 1844). Perhaps it is not surprising that Rebecca, having been George’s companion for so long, also had a keen interest in education. In 1829, at the age of sixty, she used her inheritance to build a house in which she opened a private school. This house, located at 56 St. George Street, is one of the only “date boarded” houses in Duxbury attributed solely to a woman. Rebecca Frazar died in 1840 and the house was given to her niece, Abigail Weston, who allowed the school to continue until Partridge Academy was built. In 1842, Mary Rice, a young woman from Boston who had recently returned from her time as a tutor in the South, was hired to take over as teacher.

During this same period, a new church was organized in Duxbury – in 1825 a Universalist congregation was formed by 67 members of the community. They built their church on Washington Street, approximately where the parking lot to the 1803 Winsor House Inn is today. Despite having some prominent parishioners on its roles, the Universalist church was not prosperous and had an onerous time paying its ministers. In 1843 it hired a young reverend by the name of Daniel P. Livermore “providing that we can raise money enough to pay him for his services.”[3] Eventually they voted to offer him $7 for each Sunday he preached, rather than giving him a yearly salary.

And now we come to the romance portion.

On a cold Christmas Eve in 1844  Mary Rice, the young teacher from Rebecca Frazar’s school, was making her way home. She had been a bit downcast all during the day, wondering “what was the meaning of life?”[4] She had hoped that a long walk would clear her mind but she still felt troubled. Although she had passed by the Unitarian and Methodist meeting houses, both open for the holiday, she did not stop to enter. Instead she continued on her way, ultimately coming to the Universalist Society’s door on Washington Street. Mary was not familiar with the Universalists, other than to believe their liberality bordered on the unseemly – a reputation that was wholly undeserved, but quite common. She could hear singing coming from within, however, and it sounded welcoming to her tired soul.  So it was with both trepidation and curiosity that, when the sexton held the door for her, she went inside. 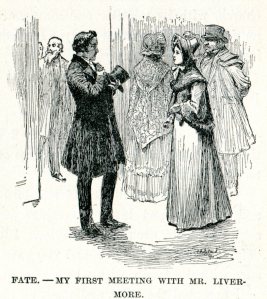 Holding forth from the pulpit was the twenty-five year old minister, Daniel P. Livermore – I can’t say whether he was handsome, but Mary described him as “blond in complexion, with a good voice and a simple, earnest, pre-possessing manner.”[5] After the sermon she met the Rev. Livermore at the door as parishioners filed out into the moonlit night. She found that he “knew me by sight and by name, although we had not met before.” She asked to borrow his sermon, which he kindly lent her. He then offered her the use of his library at his home on Powder Point (only two doors down from her own home) in order to learn more about the Universalist faith.  Though the two met frequently in the following months, Mary did not seem to think Daniel was falling in love with her. She, of course, was wrong. Within the year the couple were engaged and then married on May, 7, 1845. The timing was perfect; Partridge Academy, the dream of George Partridge, had finally opened, allowing the new Mrs. Livermore to transfer her students to good hands. Her family was not very enthusiastic with her choice of a husband at first, but they eventually came around.

Mary Livermore’s Story of My Life; or The Sunshine and Shadow of Seventy Years, which describes her meeting and courtship with Daniel, was published in 1897. If you have never read it, I encourage you to do so – or at least the chapters about Duxbury (22 and 23). It has great descriptions of the town during the 1840’s and the people who lived here.  In case you were wondering, the Livermores went on to have an eventful life together. From Duxbury, they moved to Fall River, MA and from there to Chicago. Both were active in the abolition and temperance movements. During the Civil War Mary worked tirelessly for the Chicago branch of the United States Sanitary Commission. In addition to The Story of My Life, Mary Livermore also penned My Story of the War. Daniel and Mary were married for more than fifty years and had three children.

And a final two notes: Partridge Academy remained the High School for the town of Duxbury until 1926. It burned in 1933 and the new Town Hall was built on the site. Partridge’s legacy lives on, however, in the scholarships given out annually by the Partridge Fund.

The Universalist Congregation on Washington Street dissolved sometime after 1846.  The land and building were sold in 1866 – the church was moved, possibly to Norwell.

[3] Copy of the Records of the First Universalist Society of Duxbury, 1825-1846., the original of this book is at the Archives of the Andover-Harvard Theological Library at Harvard Divinity School.

One thought on “A Christmas Romance In Duxbury”