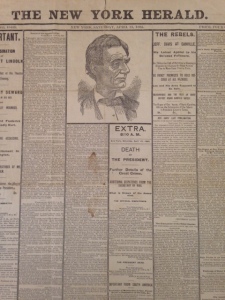 One hundred and fifty years ago today, April 15, 1865, many American’s awoke to the news that President Lincoln had been shot in Ford’s Theater the night before. In the Drew Archives’ collections we have a number of journals and letters that speak of this tragic event. Some written days after, when the news finally filtered to those far afield. Lincoln’s death was devastating to many Northerners, especially coming so close on the heels of the joyous celebrations following the surrender at Appomattox.

Captain Edward Baker was at sea when the assassination occurred. His journal entry for the April 15th, not surprisingly, makes no mention of the shooting. On April 19th Baker and his crew received papers bearing the news of Lee’s surrender ten days before. Baker wrote, “such glorious news is almost overpowering. My greatest desire, to tell the truth, was to go away by myself and have a long hearty cry, that was the way I was affected.”  After this entry, the pages in this journal were full. His next journal entry begins in a new book and is dated April 24th, 1865: 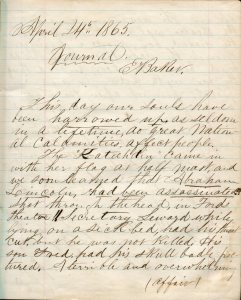 “This day our souls have been harrowed up as seldom in a lifetime, as great national calamities affect people. The “Katahdin” came in with her flag at half mast, and we soon learned that Abraham Lincoln had been assassinated!!! Shot through the head, in Ford’s theatre!! Secretary Seward while lying on a sick bed, had his throat cut, but he was no killed…a terrible and overwhelming affair.”

Like Captain Baker, brothers Gershom and Laurence Bradford did not hear of the tragedy on the 15th, but days later. Twenty-three year old Laurence was in the Navy and had spent April 15th in Richmond, VA, witnessing the somber mood of the citizens of that Southern capitol as General Lee rode through the streets. On the 16th Laurence visited Fort Darling and made no mention of the President’s death. It wasn’t until days later that he learned exactly what had occurred: 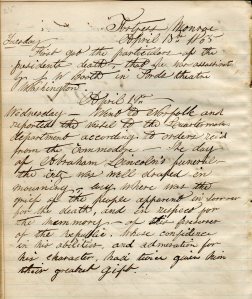 “Sailed for Fortress Monroe where we arrived on the morning of the 17th. Carried down orders for every vessel to commence and fire a gun every half hour from sunrise to sunset, in honor of the president.

April 18, 1865 Tuesday. First got the particulars of the president’s death – that he was assassinated by J W Booth in Ford’s theatre Washington.”

Laurence described the scene in Norfolk, VA on April19th, the day of Lincoln’s funeral:

“the city was draped in mourning – everywhere was the grief of the people apparent in sorrow for the death, and in respect for the memory – of this preserver of the Republic. Whose confidence in his abilities and admiration for his character, had twice given him their greatest gift.”

Gershom Bradford, Laurence’s older brother, served in the U. S. Coastal Survey during the Civil War. From April 15th – 18th Gershom was busy repairing vessels and doing other assigned tasks in South Carolina. On the 19th, in Charleston Harbor, he wrote the following mention in his pocket diary: 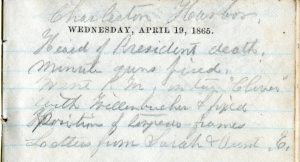 Charlotte Bradford was the Matron of the United States Sanitary Commission’s Home for Wives and Mothers in Washington, DC when she received the news. She did not record events every day, so it is not surprising that it took her over a week before she wrote of Lincoln’s death:

“April 28. The President murdered and buried. I believe there never has been a person so universally lamented. All the black material in the city used in a few hours to drape the houses. Immense crowds to see the body and at the funeral. In N. York there were said to be 150,000 went in to look at the corpse.” 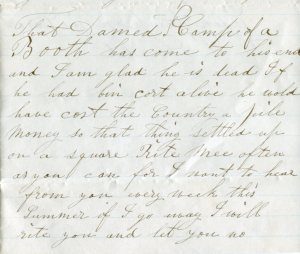 “That Damned Scamp of a Booth has come to his end and I am glad he is dead. If he had bin cort alive he wold have cost the Country a pile money so that thing settled up on a square…”